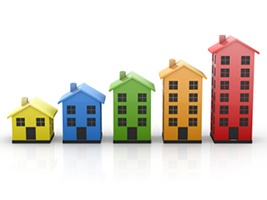 As we previously reported, the interim rule provides PHAs with two alternatives to the current requirement for setting flat rents at 80 percent of the applicable fair market rent (FMR). First, PHAs may establish flat rents based on 80 percent of an FMR representing a smaller geographic area. This second FMR would be either the small area FMR (SAFMR), issued for metropolitan counties, or the unadjusted rents, for counties not covered by an SAFMR. Yesterday's notice explains the term “unadjusted rents” as follows:

HUD will publish the unadjusted rents annually on its website. If neither a SAFMR nor an unadjusted rent has been determined for an area, PHAs must set flat rents based on the applicable FMR for the larger area.

Alternatively, PHAs may request an exception from HUD for a flat rent amount that is lower than either of the two FMRs. Such requests must include a market analysis and a demonstration that the lower flat rent is reasonable in comparison to similar unassisted units. The new notice clarifies that while HUD does not prescribe a particular formula for determining the market analysis, PHAs must compare the public housing unit to unassisted units in the area using the nine factors considered in rent reasonableness determinations for the voucher program:

PHAs utilizing exception flat rents must conduct a new market analysis, and obtain HUD approval, annually. PHAs that submit an exception request prior to the publishing of final fiscal year (FY) 2016 FMRs (likely in October 2015) will not be required to submit another exception request until HUD publishes final FY 2017 FMRs (likely in October 2016). Proposed FMRs for FY 2016 were posted last week on the Office of Policy Development and Research (PD&R) FMR page.

As flat rents are fully implemented, the higher rent levels will ensure that families with higher incomes pay an appropriate market-based rent. It is an important policy goal to provide scarce public resources to those most in need of deeply affordable housing. PHAs are therefore reminded that they have the discretion, in accordance with federal law and regulations (24 CFR 960.261; FR-4824-F-02), to establish occupancy policies that include the eviction of public housing tenants who are above the income limits for eligibility to participate in public housing programs. HUD encourages PHAs to provide a balance between the important goals of supporting the sustained self-sufficiency of families with the ever increasing demand for affordable housing units among families on their waiting lists.

Is your PHA in search of a proven methodology for ensuring that program participants are paying reasonable rents? GoSection8.com can help. Specializing in rent reasonableness, Go8 has served tenants, landlords, and housing authorities across the United States since 2004. Go8 can also assist public housing agencies with the new flat rent requirements. To learn more about how you can bring Go8 to your agency, email sales@nanmckay.com.