NMA founder and president Nan McKay is celebrating a major milestone this year: her 50th year in housing. In an ongoing series of posts, she'll be sharing her stories of how the industry has changed over the course of decades.

Nan has previously written for the NMA blog on the topic of executive management and high performance achievement in the HCV program, and was recently profiled in the latest installment of our interview series.

In the '60s and '70s, public housing for families was centered primarily in the large urban areas. Perhaps that's because, prior to public housing, low-income families' choice of housing was often to live in overcrowded slum housing. Many families in public housing were working families who were trying to survive and get ahead. The income limits were higher than today; there were "ceiling rents" which capped the rents and allowed working families to become self-sufficient.

Also, limits on amenities made the properties undesirable. The end result of highrises for families was usually floors and floors of people stacked upon people, with unreliable elevators as the only means of transport. Have you ever looked at the yard of these highrises with children as residents? It was tiny — miniscule — in many places. So where were the children supposed to play?

In some of the large cities, teenagers found a place to play. We were shocked by the stories about elevator surfing in the family highrises. The kids would climb on top of the elevator and then jump from one elevator to the other as one was coming up and the other going down. 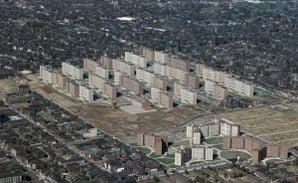 Working in the housing field, we heard about Pruitt-Igoe, a large public housing project in St. Louis which was first occupied in 1954. By the late 1960s, Pruitt-Igoe with its 2,870 apartments was infamous for its poverty, crime, and segregation.

The apartments were deliberately small, with undersized kitchen appliances. "Skip-stop" elevators stopped only at the first, fourth, seventh, and tenth floors, forcing residents to use stairs in an attempt to lessen congestion.

We also heard about the conditions in other family highrises in several of the large urban areas. These buildings were home to as many as 15,000 people, living in mid-rise and highrise apartment buildings totaling 3,000 to 4,000 units. Over the years, gang violence and neglect created terrible living conditions. Residents were threatened and had to pay a fee to the gangs to even enter the buildings. The stairwells became dangerous areas. Violence became the norm. Residents were fearful for their children as they left the buildings, even on their walk to school. In some areas there were chaotic New Year's Eve celebrations when gang members fired guns into the air, causing police to block off nearby streets every year.

Problems weren't confined to highrises. HUD began to realize that highrises for families might not have been a good idea and started to design low-rise apartments, duplexes, and even single-family residences for families. The counter problem, however, was that these units took up more space and were more costly to build and maintain. In some cities, the buildings were more likely to be three to six stories, but the concentration of poverty, the lack of employment, and in some cases, police brutality fueled the fires of social tension, a la the Watts Riots in 1965.

One would not think that government-funded projects would be segregated, but they were. In the 1970s, HUD issued directives to deconcentrate low-income households. A 1992 paper by Mittie Olion Chandler examines the lack of deconcentration in public housing, stating: "Decentralized decision making in site selection and resident selection allowed local preferences and, in most cases, existing racially divided residential patterns to prevail."

Choice and opportunity were not the buzzwords in public housing in that era. In the '70s, I remember going on a bus tour of housing developments in a large southern city as part of a national conference. The PHA tour guide was pointing out the public housing developments as we drove. Finally I couldn't stand it any longer and asked, "Are these projects integrated? They don't appear to be." I thought if the government said to do it, all PHAs would have complied. The tour guide looked me up and down and said, "Where are you from anyway?" I was very naive.

The inner-city public housing problems became worse with the widespread use of drugs. By the '70s, according to an interesting article titled History of Gangs in the United States, "public housing high-rises became gang incubators and drug turf battlegrounds." The article notes that in some cities, gangs were well established in public housing as early as the '60s.

In some ways, I wish I hadn't missed that segment of public housing firsthand. However, I have a good friend in the company, Betty Turner, who did work during that period for several large PHAs. I'm sharing some of the things she said about those days:

The advent of PCP was a major factor in the change in the public housing atmosphere in the 1970s. PCP was a liquid that people would soak a "cigarillo" in, then dry and smoke it. It caused bizarre behavior, and PHAs began to have trouble collecting rent because people were spending money on the drug. In reading about PCP, I found some interesting data. PCP was actually a veterinary drug. Its nickname was angel dust. I read a few articles that said the drug is returning to Los Angeles and Washington, D.C. Young adults reportedly are driving in from the suburbs to buy it from street dealers. So PCP's influence may not be over.

The appearance of crack cocaine in the 1980s, however, was even worse, and had a major impact on public housing. At the time, public housing funding was decreasing, and federal preferences contributed to housing the most needy families. Youth gangs and street gangs began to form territories for selling drugs. (According to an article in the U.S. Department of Justice's Juvenile Justice Bulletin, a youth gang generally has an age range from 12 to 24, while a street gang may include both youth gangs and adult criminal organizations.)

Gang members often had a girlfriend who dealt drugs out of her unit. Gang members began hanging out in the public housing projects, and residents grew fearful. People with children didn't want to live in that environment, and worried about drug influence or, worse yet, their children's involvement in gangs.

There was a key difference in public housing on the East Coast vs. the West Coast. Public housing for families on the East Coast often consisted of highrise buildings, while the West Coast had mostly mid- to low-rise housing. There were complications for both. Highrises were easier for gangs to "take over" because of the concentration, but low-rise buildings made it more difficult for PHA staff to monitor drug and gang activity.

In the early to mid '80s, cocaine became the drug of choice in the inner cities, and youth and street gang involvement in drug trafficking increased. The reality is that when a lot of money is involved, it changes the picture.

Has it been a success? Public housing is really a microcosm of society. Have drugs been eliminated in the rest of society? Are gangs no longer a problem? Have deconcentration efforts been successful?

Next: Part VIII: The advent of Section 8