Please provide some guidance on eligible immigration status. We know that some noncitizens are eligible (such as permanent residents) and some are ineligible (such as students on a student visa). We’re not sure about other categories such as “nonimmigrant.”

Is there a listing somewhere that gives specifics about what is and what isn’t an eligible status?

The applicable regulation is at 24 Code of Federal Regulations 5.506(a):

Restrictions on assistance. Financial assistance under a Section 214 covered program is restricted to:

The eligible categories are not listed in the HUD regulation, so we have to look at the United States Code under Title 42, Section 1436(a). The US Code lists the groups of eligible immigrants:

Conditions for assistance. Notwithstanding any other provision of law, the applicable Secretary may not make financial assistance available for the benefit of any alien unless that alien is a resident of the United States and is—

(1) an alien lawfully admitted for permanent residence as an immigrant as defined by section 1101(a)(15) and (20) of title 8, excluding, among others, alien visitors, tourists, diplomats, and students who enter the United States temporarily with no intention of abandoning their residence in a foreign country;

(2) an alien who entered the United States prior to June 30, 1948, or such subsequent date as is enacted by law, has continuously maintained his or her residence in the United States since then, and is not ineligible for citizenship, but who is deemed to be lawfully admitted for permanent residence as a result of an exercise of discretion by the Attorney General pursuant to section 1259 of title 8;

(4) an alien who is lawfully present in the United States as a result of an exercise of discretion by the Attorney General for emergent reasons or reasons deemed strictly in the public interest pursuant to section 1182(d)(5) of title 8;

(5) an alien who is lawfully present in the United States as a result of the Attorney General’s withholding deportation pursuant to section 1231(b)(3) of title 8;

(6) an alien lawfully admitted for temporary or permanent residence under section 1255a of title 8; or

The eligible categories are also listed on the second page of HUD’s model declaration of Section 214 status. Noncitizens who are not in an eligible category are ineligible. This includes undocumented persons, students on a student visa, workers on a work visa, sponsored aliens, fiancées, and all others not categorized as eligible.

Aliens in nonimmigrant status are most likely ineligible. Here is the definition of “nonimmigrant” from the US Citizenship and Immigration Services website:

An alien who seeks temporary entry to the United States for a specific purpose. The alien must have a permanent residence abroad (for most classes of admission) and qualify for the nonimmigrant classification sought. The nonimmigrant classifications include: foreign government officials, visitors for business and for pleasure, aliens in transit through the United States, treaty traders and investors, students, international representatives, temporary workers and trainees, representatives of foreign information media, exchange visitors, fiance(e)s of U.S. citizens, intracompany transferees, NATO officials, religious workers, and some others. 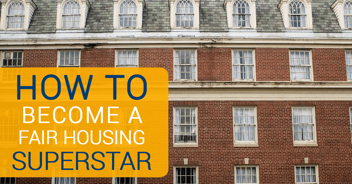 4 tips for being a fair housing superstar (part 3)

One of our clients recently reported that he cashed in a 401(k) account. The full value...

What's so great about online learning?