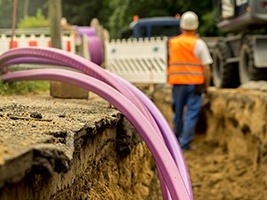 On December 20, 2016, the U.S. Department of Housing and Urban Development (HUD) published in the Federal Register a final rule requiring the installation of broadband infrastructure at the time of new construction or substantial rehabilitation of HUD-funded multifamily rental housing. While the title of the rule suggests that it applies only to HUD’s multifamily programs, it does also apply to multifamily rental units funded under the project-based voucher (PBV) program, the public housing capital fund, and Choice Neighborhoods programs.

The purpose of the rule is to “narrow the digital divide,” that is, to provide families residing in HUD-funded housing a platform from which to participate in the digital economy and thereby increase their access to economic opportunities. In addition to making it a requirement to install broadband infrastructure during new construction and substantial rehabilitation, the time at which installation is easier and less expensive, the rule also:

Further details, including a comprehensive list of programs to which the requirements apply, can be found in the rule. It becomes effective January 19, 2017.

If you’re interested in learning more about HUD's multifamily programs, don’t miss our newly redesigned seminar, Multifamily Housing Specialist. In response to customer feedback, we've extended this class to four days, providing a comprehensive training on the HUD Handbook 4350.3 REV-1 which covers eligibility, screening and selection, admission, rent calculation, recertification, termination, and a discussion of HUD’s multifamily systems. Our next session is being offered in June in Wisconsin and is currently on sale for 10% off when you purchase now. Register here.