Meet me in San Diego

I think we can all agree that the past year has been one of the most challenging in recent memory. Up until the last moment, many of us didn't really think that sequestration would go through. But it did, and our nation's housing authorities rose to the test.

For the upcoming NMA Housing Conference and GoSection8 User Conference, we've brought together a diverse group of speakers and industry experts to provide insight on a broad range of topics relevant to those of us facing budget cutbacks under sequestration, including: 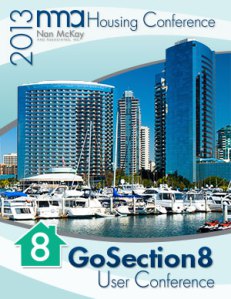 I hope you'll be able to attend the inaugural NMA Housing Conference, now only a few weeks away — and when you do, come on up and say hi! I look forward to sharing strategies for success.